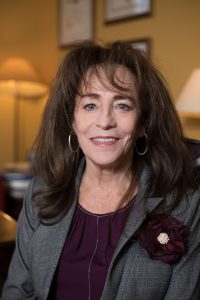 Beverly was born and raised in New Castle County, Delaware, graduated from the University of Delaware, and the Delaware Law School of Widener University. One of the area’s leading personal injury attorneys, she confines her Wilmington practice to representing people who have been injured in construction site, auto, nursing home, and hospital negligence as well as workers’ compensation.

For nine of her 27 years of practice, she was the managing partner of the Wilmington office of an out of state law firm. She is admitted to practice before the Delaware and Pennsylvania State, and Federal Courts, the Third Circuit Court of Appeals, and the United States Supreme Court. She now practices with an associate attorney, two paralegals, a nurse, and other support staff.

Beverly is the past president of the Delaware Trial Lawyer’s Association and is currently one of the two governors from Delaware on the Board of the AAJ. She currently serves on several committees aimed at preserving her clients’ rights.

She is active in preserving the jury system and the injured’s access to the courts by working closely with Delaware’s general assembly and the United States Congress toward those goals. She is a member of the Million Dollar Advocates Forum and was featured in the August 2006, “Top Lawyers” issue of Delaware Today magazine.